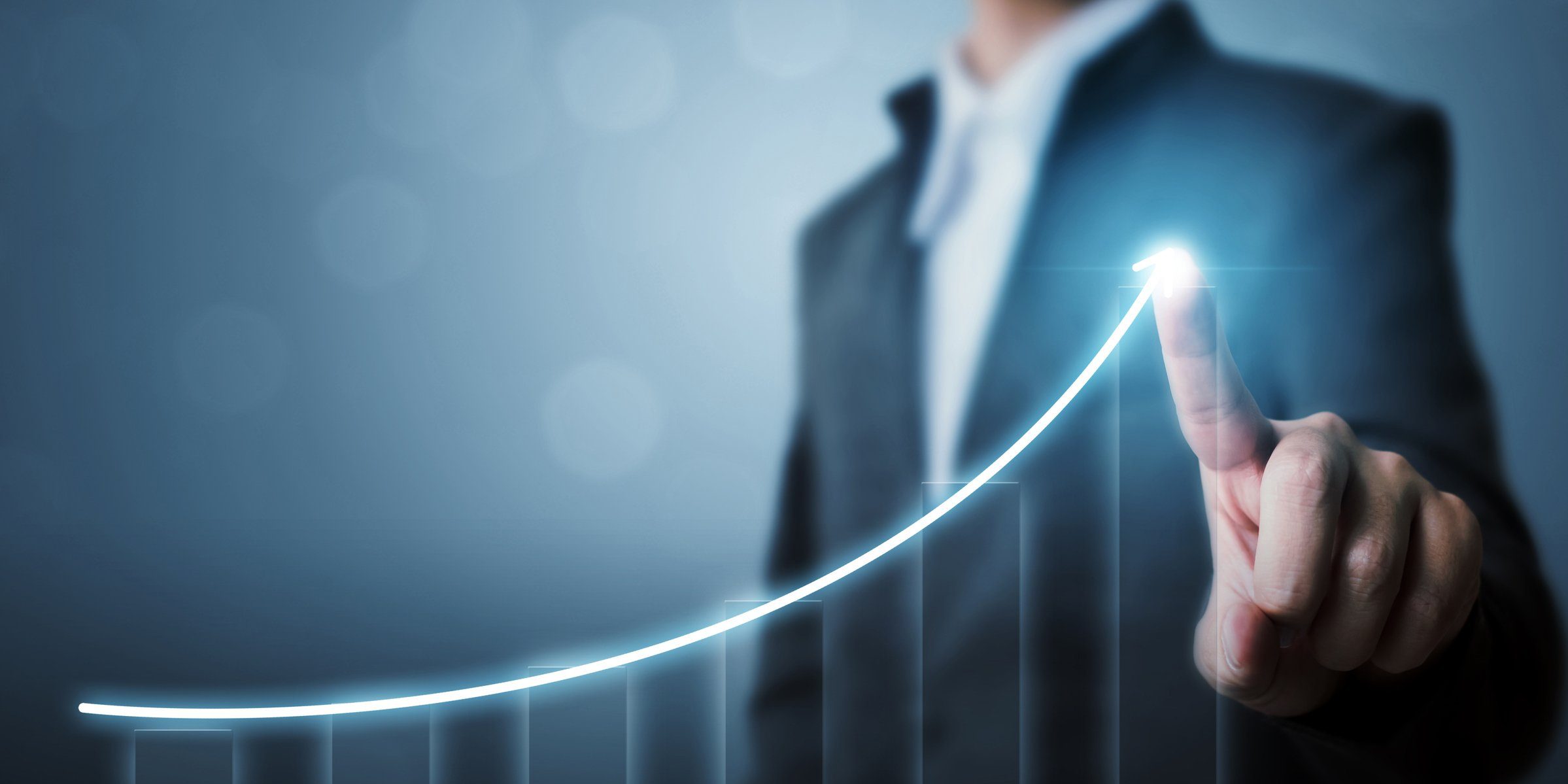 UK employment is at its highest since 1971. A record of 32.7 million people were employed between November 2018 and January 2019, according to figures published by the Office for National Statistics (ONS) on 19th March. In fact, unemployment fell by 35,000 to 1.34 million during this period to just 3.9%, the lowest it has been since 1975. In the last year alone rates have fallen by 112,000, meaning UK unemployment is now well below the EU average of 6.5%. Whether this will change post-Brexit is anyone’s guess, as a number of companies have already announced downsizing, job cuts, or their complete departure from the UK as it leaves the EU. However, it is still uplifting to see employment as high as it currently is.

Here at Hopewiser, we love analysing data so we took a look at the four regions in the UK with the highest employment rates. 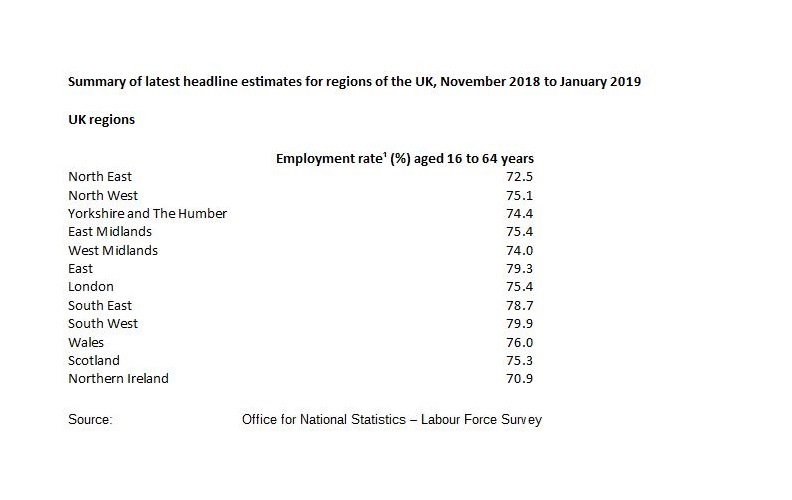 The region with the highest employment figure is the South West of England with 79.9% of people aged between 16 and 64 being in some form of employment. That said, the area has the lowest accumulative total of weekly hours worked at 61.8, which could be a reflection of off-peak trade in tourist areas. Kim Conchie, Chief Executive of Commerce Cornwall, expresses that tourism is vital to the area’s economy. She adds that lapses in trade may result in shorter opening hours and closed seasonal businesses until peak season arrives.

“Some businesses will need to adjust opening hours according to how many customers may be around which is sometimes detrimental to communities.”

This is in comparison to Northern Ireland who work a total of 66.8 hours per week, which is the highest in the UK. However, Northern Ireland have the lowest employment rate in the data set at just 70.9%.

A possible reason for this spike in the number of working people could partially be due to the increasing number of businesses setting up shop in the area. According to an article we read, the South West spends 10% more than the national average on research and development. This in effect has attracted over 1500 international businesses to settle in the region.

It is possible that South West employment could soar even higher in the future due to efforts made by local non-profits such as Link Centre in Taunton. Opened by Amber Rudd on 1st March, the centre will work with vulnerable people who are socially isolated and are less likely to access employment services such as job centres. The charity aims to build their skills and confidence in order to help them get back into work.

In second place on the ONS employment statistics is the East of England with 79.3% of residents aged 16-64 being in employment. Additionally, this area ranks third in terms of earnings, where the median annual summary of earnings is £24,602. This is in comparison to the South East of England (£25,780) and London (£29,666). Despite having a slightly lower employment rate than the South West, they work more hours which is reflected in their salaries.

According to the Halstead Gazette, a total of 371,000 more people have been employed in the East of England since 2010, and economic inactivity has dropped to a record 18.1%. Employment Minister, Alok Sharma, has expressed his delight at the figures and stated that they reflect how the country’s pro-business policies are delivering record employment levels.

However, as promising as these statistics may seem, the Confederation of British Industry (CBI) has warned that a no deal Brexit will put trade relationships across the globe at risk. Currently, exports from the East of England to countries with EU free trade agreements are worth more than £4 billion every year. This accounts for more than 10% of the region’s exports.

Included in these agreements, the East exports goods worth £570 million to Turkey and £350 million to Canada each year. In the event of a no deal the UK may risk losing the benefits of free trade with neighbours and reduce its negotiating powers with the rest of the world. This could potentially incur costs amounting to millions of pounds for the East of England’s economy. That said, the UK could compensate by forming their own trade alliances. Additionally, those small and medium-sized businesses who have not yet traded overseas would be freed of the constraints that come part and parcel with EU membership.

Following closely behind is Wales with a 76% employment rate. Out of this group, Wales’ median earnings (£21,500) are lower in comparison to the aforementioned regions. Whilst this is reflected in the weekly hours worked when compared to the East (62.4 and 64.6 respectively), the region still works more hours than the South West. That said, Wales fares better than Northern Ireland, Yorkshire and The Humber as its working population earns more money than these two regions as well as working fewer hours each week.

Wales247 reported that Welsh businesses recorded the strongest fall in employment since December 2011. However, NatWest Wales PMI data highlighted a stronger rise in business activity during February 2019. This was amidst reports that Brexit uncertainty had somewhat halted recruitment, therefore, confidence surrounding the spike in business activity has remained relatively muted despite the four month high increase.

Welsh businesswoman, Laura Tenison, founder of JoJo Maman Bebe, supports the above findings and is convinced that Brexit uncertainty is stalling business growth. The clothing and accessories company told the BBC that consumer confidence is at an all time low, resulting in their capacity to send out 6,000 parcels a day being reduced to just 2,000 a day.

“They’re just not buying as much and looking at their spend more carefully – they’re not coming in to store as often and it’s online too.”

Last but by no means least is the North West of England. Whilst this region has a slightly lower employment rate (75.1%) than East Midlands (75.4%), London (75.4%), and Scotland (75.3%), the North West has actually seen the largest change in workforce jobs with a 130,000 increase. Workforce jobs refer to the number of filled roles in the economy, and are estimates sourced from employer surveys. They are a different concept from employment rates which are sourced from the Labour Force Survey (LFS), because ONS consider employment as an estimate of people and some may have more than one job.

Jake Berry, MP for Rossendale, expresses that the rise in employment is good news for the North West and the whole Northern Powerhouse. The figures reflect the Government’s investments in communities across the North to help everyone reach their full potential:

“We are determined to do even more which is why people across the North West will benefit from £281 million as part of the new Stronger Towns Fund to create jobs, provide training and boost economic growth.”

It’s also down to businesses who are driving this growth as private sector employment has increased by 3.8 million since 2010.

This blog is part of a series that analyses freely available data. We understand the impact of how data is collected, handled, and processed and as such can help you with all your data needs, whether that is address cleansing, bank account checking, or bulk mailing discounts.